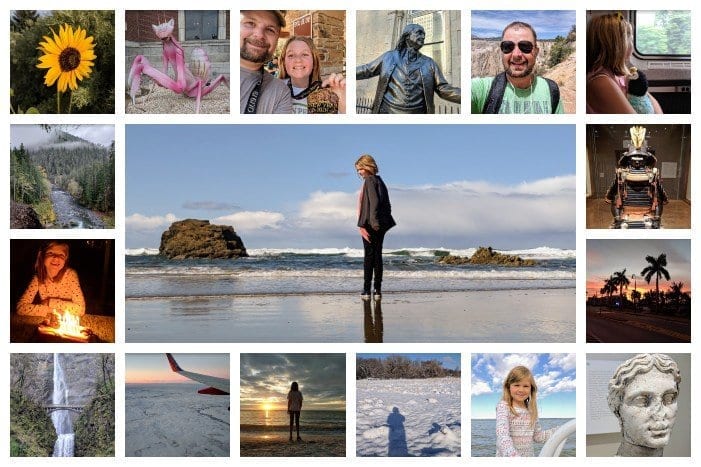 Jillian asked me to do this interview almost two years ago. Then life got busy. Then, it got busier. I kept on telling her I’d complete it in two weeks. And then I wouldn’t. Instead of producing the post, I’d produce more excuses.

However, I do keep my word, even if I am very, very, very late. So today, I will tell you a little bit about my life almost two years into retirement. But before I begin, there is a lesson in my tardiness.

Before I left work, I was incredibly worried about being bored. In fact, I held on to my job much longer than I needed to because I was terrified about making the leap (more on that later in the post). How silly was I?

Now, my days are bursting at the seams with activity. I build things in the garage, work on various websites, learn new recipes, manage a coworking space with friends, run, read, write, photograph my surroundings, and think. And that’s just in the seven hours while my children are in school. I don’t have enough hours in the day or weeks in the year. Heck, I don’t have enough years in my life. So, that’s why I’m almost two years late.

Do you wish you would have made the jump sooner?

Long answer: My money goal was to accumulate a million dollars, plus enough to pay off my home. I accomplished this goal in April of 2016, but didn’t muster the courage to quit for another year.

I worked really, really hard for most of my life. I earned straight As in college, majoring in Biology and Chemistry. My degree was useless, so I ended up working as a software developer where I’d frequently put in 60 hour weeks. At the same time, my wife and I flipped homes. 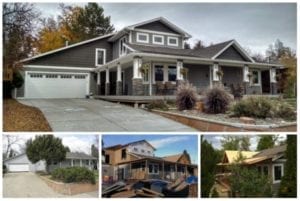 While my two-decade-long death march was good for the investment account balances, it wasn’t good for life. Work-life balance? Ha! I had a work-work balance. I don’t recommend that you follow in my footsteps.

In any case, it was hard to reconcile a couple of decades of hard work with leaving my job. After all, my existence at the time was consumed and defined by work. Sad.

By the time April of 2017 rolled around, it was all too much to handle (did I mention that I have children too?), so I made the leap. Life hasn’t been perfect (more on that later too), but there is NO WAY I’d go back to a full-time job.

What is something almost no one gets about retiring early but it’s hard to explain?

Everything is going to be alright. Stop worrying.

It’s human nature to worry and dwell on worst-case scenarios, so most folks have lots of doubt about early retirement. I call it One More If syndrome. Here are some of my favorites along with my responses:

What if I love my job?

Also, the goal of FIRE isn’t really to quit work, but to provide options. If you really do love your job, stay there! You have found something wonderful and rare. However, I don’t think most would make this choice.

What if people think I’m crazy?

Who cares. Life is best lived on your terms and by your rules. No one ever did anything great by acting like everyone else. Normal behavior yields normal results. Boring. Besides, if you follow the herd, you step in poop. Don’t follow, lead.

What if I run out of money?

What if you run out of life?

You probably won’t run out of money, but you will die. It’s up to you to decide how to spend your precious time on this lovely planet.

What kind of person will fail at early retirement?

One must cultivate a rich life outside of work. If you validate yourself through your job and build your life around it, early retirement will be difficult. Story time!

Around the year 2000, I was working as a programmer for a large retailer that was struggling. Folks were constantly getting laid off. One day, my manager told me that my job was safe, but the guy across the aisle from me (Sean) was getting laid off tomorrow. The next day, I watched with anxiety as Sean’s manager escorted him to a conference room to deliver the bad news. I glanced up about 15 minutes later and saw Sean packing his belongings. And he was sobbing. Sean was devastated.

Sean was a software developer too, so it wouldn’t be hard for him to get another job. However, he had built his life around this one. All of his friends worked there. He participated in company sports leagues. He went out after work and on weekends with coworkers. When he was laid off, he not only lost his job, but his identity.

After seeing Sean that day, I vowed to keep work mostly separate from the rest of my life and I’m thankful for it.

Are you glad you have side income? Why?

Yes, but let’s back up a second so you know where I’m coming from.

Growing up, my parents sometimes struggled financially. Like many, they just didn’t have a financial education. Also, money was a taboo topic. My parents would talk to me about sex, but never about money.

Seeing their struggles terrified me. I wanted to make sure I never had financial insecurity, so I figured out what job would pay me a lot (software development) and worked very hard at it. When the big money started flowing in, I hoarded it. At the same time, my lovely wife and I flipped homes. Even as our net worth grew, I’d still wake up in the middle of the night from nightmares where I had lost my job and couldn’t provide for my family.

The nightmares are gone now, but I still have haven’t completely overcome the financial insecurity. Maybe I never will.

What’s it like not having a normal paycheck? Do you miss it?

I did miss it for a while. Here is how my brain worked:

Do you stress about your net worth, income or spending? And more or less than 5 years ago?

When I first stopped working, I thought about money frequently. I missed the big paychecks. Now, because I guard my time vigorously, I have to pass on income opportunities on a daily basis. Never, ever forget that time is your most valuable asset.

Has FIRE changed any relationships? For good or bad?

In the short term, it harmed my relationship with my wife. Long term, it’s better.

My wife and I had some issues that were buried because we just didn’t have time to consider them. In some ways, we’re very different people, but when adults are busy with jobs and children, life can pass you by. After I left my job, I finally had time to contemplate life and realized that I wasn’t happy with some aspects of living that I had previously accepted or ignored.

Now that we’ve worked through the issues, our marriage is better than ever. Put a check in the win column for FIRE.

How has the FIRE community been helpful in your journey?

The FIRE community is incredibly important on many levels.

I wouldn’t have known anything about early retirement if I didn’t stumble across Mr. Money Mustache and Get Rich Slowly. A bad day at work in October of 2012 led me to Google something like “How do I retire early?” Up came MMM and JD Roth who showed me the path. Before that day, I had no idea that anyone left work before their 60s. So, I got my start as a direct result of the FIRE community, but the real value came later.

Having a supportive, welcoming community, is incredibly important. If I have a question about taxes or sophisticated investment strategies, I can usually find a definitive answer within minutes from Choose FI or Mr. Money Mustache forums. If you’re going to pursue a lifestyle that isn’t normal, it also helps to have others along for the ride with you, even if they’re just internet friends.

The most important community though is the local one. Having like-minded people in my town is an incredible gift. We watch each others’ children. We help each other with projects. We invite each other over for spontaneous porch parties and backyard barbecues. I can’t stress enough just how important it is to be part of a good tribe. 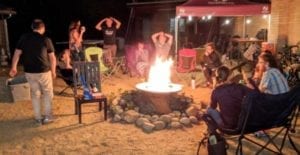 Just another party with my tribe.

What’s something that makes sense now but you didn’t see coming?

I was so worried about being bored after I left work. A couple of years before I left, I made a list of things I wanted to do once I stopped working. It includes books, hikes, and other randomness. The original list had about one-hundred items. Almost two years later, I’ve crossed off about five items, but have added two hundred more.

I now realize that I’ll need many more lifetimes to do everything I want to do and see everything that I want to see. I was so silly to worry about being bored.

What still makes you want to pinch yourself because it’s so wonderful?

I’m so happy that I get to be there for my children: 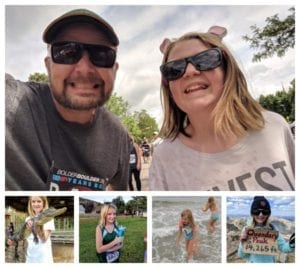 I wouldn’t trade these moments for anything.

Being this far in what do you imagine life will look like in 5 years?

I don’t have a clue and I’d have it no other way.

Which is more interesting; spending the next couple decades of your life here:

Or in The Land of Infinite Possibility: 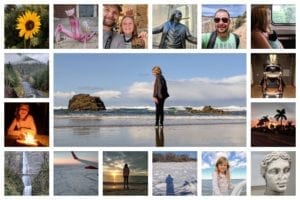 I have no idea what I’ll be doing in five years. Heck, I don’t even know about one year. I’ll go where my interests and passions take me.

I have a feeling that wherever I end up, it’s going to be pretty great.

Carl will also be speaking at Chautauqua in the UK! We still have a few tickets if you are crazy enough to want to spend more time with this guy!