How to Find Work You Love with Nick and Hanna True 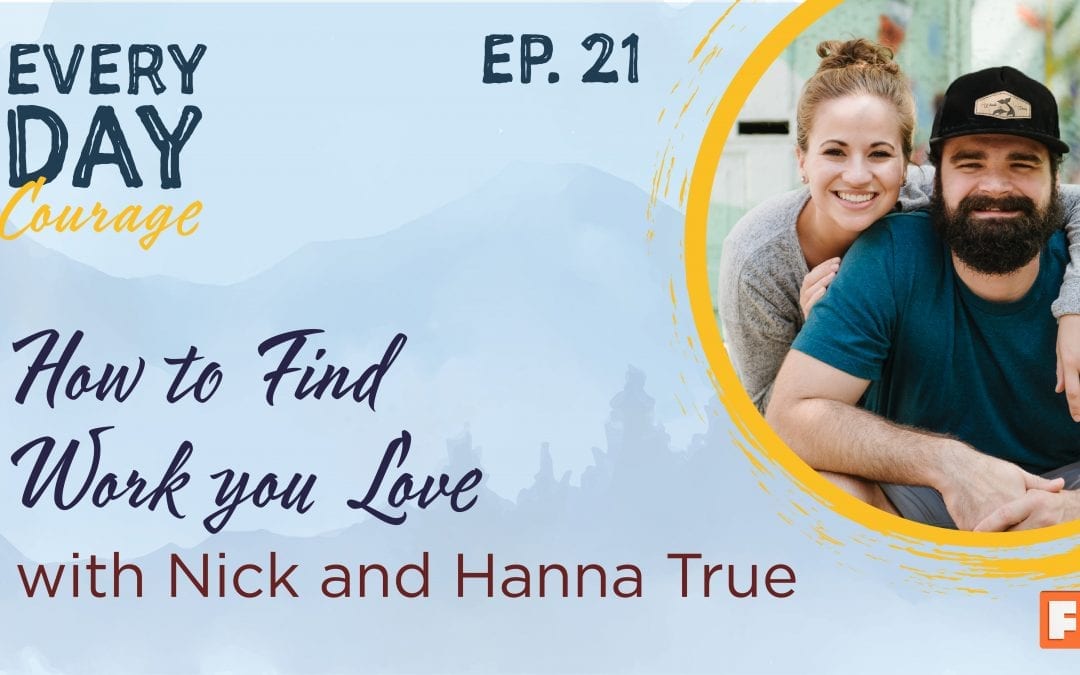 Leveraging Your Finances as a Couple

Nick and Hanna True join Jillian to talk about how they were able to leverage their finances in order to live their best life together. But first, they had to get on the same page.

They came into their marriage with different mindsets about finances and money. Hanna was raised watching her parents make wise money choices. When she became an adult, she found that, while she had money boundaries, she liked to make spontaneous choices with her money, and that was something she brought into her marriage with Nick..

Nick had a long term, budgeting focused approach to the finances. Hanna didn’t even know what the budget was, and Nick would get text messages every time a purchase was made. Finances and budgeting became a big point of conflict in their marriage, and they knew they had to come up with a better solution. One thing that brought them together was the addition of pets to the family. Budgeting for a dog gave Hanna an appreciation for long term budgeting, and now she realizes how planning long term really helps put things into perspective.

One of Nick and Hanna’s top priorities, when they got married, was to travel. They got an airstream, and began their new travel life. However, it wasn’t all they had imagined; it definitely came with its challenges, and their first 48 hours became a big challenge.

“Even when we’re chasing down our dreams, it can be a little messy.”

It can be hard to chase things we haven’t tried, because we know that there is the possibility we could fail. So we hold back, because the idea of our dreams often looks a lot more appealing than the idea of doing what it takes to make those dreams happen.

The process was slow for Hanna. It wasn’t a one and done thing, but she worked toward her dream life and job, and she gave herself permission to grow and not be the best at something right away. It’s all about having a growth mindset, and viewing hindrances as opportunities to learn.

For Nick and Hanna, they have found that the best way to work together as a team is to be pulling on the same end of the rope—encouraging each other in their individual talents and abilities.

When we chase the work we love, it’s easy to be afraid of judgement, because not everyone gets it or is impressed.

When it comes down to it, people aren’t thinking about you as much as you think they are, so don’t worry about their opinions. Live the life you are happy with.

[01:36] Growing up, Hanna got to see her family make good money choices, but budgeting wasn’t a big emphasis. She liked to make spontaneous purchases within reason, whereas Nick had a budgeting focused approach.

[04:45] Nick’s long term approach to money and Hanna’s spontaneous spending became a point of conflict in their marriage. When they decided to get a dog, budgeting for it became a motivator for Hanna to embrace long term budgeting and planning, and that helped them get on the same page.

[10:00] When Nick and Hanna got married, they knew they wanted to travel. They purchased an airstream and began their new travel life, only to find that it wasn’t as easy or glamorous as they expected.

[13:43] It can be intimidating and embarrassing to take a risk, because we know there’s the possibility we might fail. Hanna struggled with the pressure of making sure her new job was a success when she stepped away from physical therapy. The trick is to look at every setback or mistake as an opportunity to grow and learn.

[17:42] Nick and Hanna learned that working together and encouraging each other instead of working against each other is the best way to be on the same page in marriage. They found that by doing so, they complement each other and live the life they both want.

[19:15] Social pressure can be a big hindrance to chasing our dreams and the work we love. It’s easy to worry about what people around think of us, but the reality is that people don’t think about us as much as we think they do.